Almost four years ago, Magellan Health Services, a specialty health care manager focused on some of today’s most complex and costly health care services, sought to better understand the impact behavioral health services have on consumers.

Magellan’s goals were to ensure the highest level of care, improve communication between individuals and health care providers, and measure success.

Magellan anticipated a major shift in health care policy toward demonstrating treatment effectiveness. This prescient decision to develop a comprehensive health outcomes measurement program now places Magellan at the forefront of a movement to instill more accountability and transparency into the health care system.

This trend is evident in the recently passed American Recovery and Reinvestment Act, in which $1.1 billion was set aside for comparative effectiveness research.

The SF-BH is a self-reported assessment that measures “not only overall physical and mental health, but specific behavioral health concepts as well,” according to Joann Albright, PhD, senior vice president of Quality, Outcomes, and Research at Magellan. Dr. Albright led the effort to develop the SF-BH at Magellan.

The SF-BH stands for Short Form Behavioral Health Assessment. At its core is the Optum SF-12® Health Survey, plus additional behavioral health questions.

"The SF-12 is a shorter version of the SF-36® Health Survey — the most widely used patient-reported outcome measure in the world — and uses just 12 questions to measure functional health and well-being,” explains Mark Kosinski, MA, vice president and senior scientist at Optum. “It is a practical, reliable and valid measure that is particularly useful in large populations.”

Magellan consumers complete the assessment online at baseline (upon referral) and at follow-up appointments. The technology used to administer, collect, score and report on the SF-BH is the Optum Smart Measurement® System.

The data is collected and scored automatically through this technology, and a variety of customized reports are then generated for Magellan. These reports are also sent via email directly to the individual completing the assessment and the health care provider.

The SF-BH was developed in U.S. English and U.S. Spanish to address the needs of Magellan’s population.

For this analysis, data from 33,362 assessments completed over the previous three years was used.

There were additional consumers who had more than three assessments; however, the sample size was too small to conduct meaningful analyses of outcomes.

Two separate approaches were taken in this analysis. First, we evaluated the health burden of the Magellan population. That is, the health status of this population was compared to the U.S. general population average to determine if Magellan’s population was more or less healthy than the norm.

Second, we analyzed the health outcomes of the Magellan population, or how health improved or declined as a result of treatment intervention. Finally, we offered analysis to help place these results in context and help understand the outcomes from a return on investment perspective.

As can be seen in Figure 1, the greatest burden was observed in those dimensions of health most related to mental health status.

In the total population (n=33,362), Magellan consumers scored significantly lower than the general population norm on the vitality, social functioning, role-emotional, mental health and mental summary scales. On each of these scales, the differences in scores were in the large effect size range (>0.8 SDs).2

The same analysis was also conducted on Samples 2 (n=9,661) and 3 (n=1,260). Sample 2 scores on the physical functioning, role-physical, bodily pain and physical summary scales were below the general population norms; however, the differences reached statistical significance on just the role-physical scale.

Sample 3 scores were significantly lower than the general population norms on all eight scales, as well as both the physical and mental summary scales. To further illustrate this health burden, we examined the content of the SF-12 questionnaire items showing the greatest difference from the U.S. general population norm.

Figure 2 shows that the percentage of Magellan consumers (n=33,362) reporting having little or no energy during the past four weeks was more than double the percentage observed in the general population (50.1% vs. 23.1%).

Lastly, the percentage of Magellan consumers who reported being downhearted and depressed all or most of the time in the past four weeks was seven times higher than the general population (44.6% vs. 6.2%).

Changes in health status were investigated in several ways. First, mean changes in scores were computed from the initial (visit 1) to the last administration (visit 2 or visit 3) of the SF-BH.

Score changes of this magnitude are in the moderate to large effect size range. Significant improvement was observed in the role-physical and bodily pain scales; however, the effect size was small.

Second, because mean changes in scores can mask the underlying variability of outcomes in the population, we evaluated categories of change scores on the physical summary scale (PCS) and mental summary scale (MCS).

Lastly, among Magellan consumers with three assessments, we evaluated the trends in PCS/MCS scores over time.

Content-based interpretations were applied to provide meaningful interpretations of the mental health outcomes observed in Sample 2 (see Figure 4). As shown, the percentage of Magellan consumers who reported having little or no energy all or most of the time during the past four weeks dropped from 56.5% to 33.8%.

Lastly, the percentage of consumers who reported being downhearted and depressed all or most of the time during the past four weeks dropped from 52.8% to 16.3%. 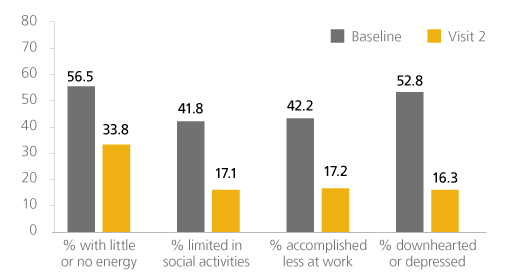 In addition, we identified that 83.3% of Magellan’s population screened positive for depression at the initial visit, using applied published interpretation guidelines for the mental summary scale.3

An estimate of the reduction in annual medical expenses is presented in Figure 5. Using an algorithm tested and validated by Optum and used by the federal government’s Agency for Healthcare Research and Quality (AHRQ), Optum was able to translate PCS and MCS scores into predicted medical expenses.4

The improvement in reported health status for the Magellan population (N=9,661) theoretically translates into an annual cost savings of around $300 per individual for an annual savings of more than $3 million in the measurement cohort.

Measuring these concepts has made it possible for Magellan to obtain a comprehensive understanding of the health of their population — vital information not previously measurable. Results of the data are also ideal for use in comparative effectiveness research or analysis.

Magellan can now answer vital questions about its programs, such as how the mental health burden of its population compares to that of the U.S. general population, whether interventions are resulting in positive or negative outcomes, and even how one approach compares to another.

Magellan and Optum have been successfully working together now for well over three years and plan to continue working together. Magellan still uses the SF‑BH and plans to expand both the frequency and type of use in other programs.

In an effort to increase compliance and reduce the burden to those consumers who are unable to complete the SF-BH online, Magellan’s first item of expansion will be the June 2009 implementation of a fax mode of administration.

“Increasingly, consumers and providers recognize the value of the SF-BH,” says Dr. Joann Albright, SPV of Quality, Outcomes, and Research at Magellan Health Services. “The field of health outcomes measurement is evolving and growing, and we definitely look forward to future ventures with QualityMetric.”