Job growth has risen steadily in recent years, with millions of Americans back at work since the last recession. In many industries, demand outpaces the supply of available candidates. For employers, attracting and retaining skilled workers have again become priorities.

With the cost of employee recruitment, training and retention estimated to be between 10 and 40 percent of a typical annual salary, employers are seeking to increase employee loyalty.1

Many companies believe population health programs can help achieve that goal. However, there is little empirical research examining the association between such programs and employee retention.

With that in mind, Optum® conducted a research study of employers to determine whether employee participation in health programs in combination with health risk surveys may lead to improvements in employee retention.

Limiting the sample to newly insured employees in 2012 helped improve the likelihood that the researchers could estimate whether a relationship existed between participation in new health promotion programs and subsequent retention. 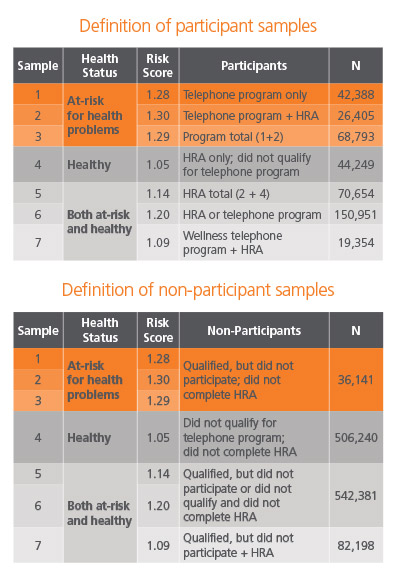 To examine differences in the probability of retention, researchers used propensity-weighted regression and econometric models. These models adjusted for age, gender and other demographics, as well as the potential issue of reverse causality.

Reverse causality could have occurred if longer tenure was more likely to lead to eventual program participation, rather than the other way around.2

Results (see chart) showed that participants were between 71 percent more likely to 5 percent less likely to remain with their companies over the three-year study period, compared with non-participants, depending on the sample and model used.

Sample 6, which included employees participating in telephonic programs or completing HRA surveys, were at the high end of this range (71 percent).

After correcting for potential reverse causality bias, retention was significantly more likely (17–71 percent) for all samples of program participants, compared to rates among similar non-participants.

The proportion of employees retained for each sample showed retention rates from 2012 to 2014 ranged from 16 to 46 percent.

The value of targeted strategies

These results suggest that when employers strive to create relevant, targeted health management strategies for their employees, focusing on both healthy and at-risk individuals may help to achieve higher retention rates than focusing solely on at-risk employees.

In this study, participation in health promotion programs was associated with health plan retention among new health plan members, which researchers speculate may be a viable proxy for employee retention.

The results suggest that efforts to maintain or increase health activation among employees, at a minimum by increasing participation in HRA surveys, may lead to increased retention.

The value of investment in population health management is not limited to its impact on medical cost trend. Future research should continue to explore the relationships between participation in health management initiatives and other financial and nonfinancial outcomes.