The 5 cost drivers of diabetes care

We know that the share of spending payers are dedicating to people with diabetes is on the rise. We also know why: the population of diabetics is increasing and the costs associated with treating them are becoming more expensive on a per capita basis.1, 2 However, to get a more complete picture of this cost equation, we need to first examine the cost drivers behind these two factors.

Currently, diabetes affects more than 29 million people in the U.S., or 1 in 11 Americans.1 Another way to understand the scale of diabetes problem is to consider that 3700 people are now diagnosed with diabetes in the U.S. every day.3 These numbers are considerable in their own right, but what is most noteworthy is that the percentage of Americans being diagnosed is increasing. Between 1994 and 2014, the number of men diagnosed with a type of diabetes grew 113% and the percentage of women jumped 95%.4

Here we can see that diabetes ranks among the fast-growing chronic diseases in the U.S.:

But is demography destiny? Perhaps not. Remember that the vast bulk of new diabetes diagnoses are for type 2 diabetes, which is linked to diet and sedentary lifestyles.

For an indication of the future type 2 diabetic population, one need only look at the current population of people with prediabetes, a condition defined by elevated blood sugar levels.1

Although patients with elevated blood sugar levels can avert type 2 diabetes with changes to their lifestyle, of the 86 million people in the U.S. currently with prediabetes, up to 30% are expected to develop type 2 diabetes.6 That’s an additional 17 million diabetics — nearly 60% growth.

The pipeline is filled with potential future diabetes patients:

Later in this Insight Report we will discuss diabetes-specific management strategies that can help payers better govern medical spending related to diabetes.

As the number of diabetics continues to climb, so will the costs. This projection shows diabetes-related health care spending rising rapidly in the coming 15 years to more than a half-trillion dollars each year:5

No matter the scope of the problem, no assessment of diabetes-related costs can stray far from the topic of drug prices. As we have seen, the number of classes of antidiabetic drugs continues to increase. While drugs in a few of the older classes of antidiabetics are actually falling in price, these are more than offset by the rising cost of newer, protected brand therapies (see below).7

As newer therapies gain in popularity, antidiabetic drugs are costing more on a per-dose and per-patient basis each year. For example, three classes of drugs (oral hypoglycemics, incretin mimetics and SGLT2 inhibitors) now collectively account for 31.4% of diabetes spending.7

However, it is important to note that most of the net price growth in recent years was from existing branded drugs, not new drugs. But even within that class, overall costs were down, after rebates and discounts:7

4. The curious case of insulin

Yet, even in aggregate these newer classes of antidiabetic drugs take a back seat to the drug class most responsible for increased spending on diabetes: insulins. In 2014, insulins accounted for 63.3% of diabetes drug spending and 61.3% of spending growth.7

Insulin was the original wonder drug. Discovered by researchers at the University of Toronto, insulin was first used to treat a patient in 1922.8 In the decades since, it has helped turn what was once a fatal affliction into a manageable, if chronic, condition. Along the way, drug manufacturers have continued to modify the chemical structure of insulin in order to improve its efficacy and safety.9

In the 1930s, scientists began to alter the composition of insulin to make it longer lasting, so patients would need fewer injections.9 Later, drug makers learned to combine long-acting and short-acting insulins, allowing some diabetics to be treated with a single daily injection.9

In 1970s, a breakthrough in genetic engineering enabled the creation of the first recombinant DNA human insulin.10 By inserting a cloned human insulin gene into a strain of the E. coli bacteria, researchers produced synthetic human insulin. Doing that eliminated adverse immunologic reactions to nonhuman proteins, which had long plagued some users of earlier insulins, which were based on beef and pork byproducts.10

Today, a variety of short-acting, long-acting and premixed insulins are available.9 While users have benefitted, these improvements have come at a steep cost. Researchers have dubbed this "The Paradox of Incremental Innovation.”11

Unlike most other in-demand pharmaceuticals, by the time the patents expire on a given insulin variation it may already be obsolete.11 Considering the steady pace of incremental improvements, competitors are leery to replicate off-patent insulins, reasoning that the market has already moved on. This need to meet the demands of an ever-evolving marketplace, paired with the complexity of large molecule drug production, has hindered the formation of a generic insulin industry in North America.11

But let’s say a drug manufacturer was willing to produce generic insulin despite the manufacturing challenges and market uncertainty. They would still have to navigate a dense web of patent protections surrounding insulin.12

One enduring irony is that the team that discovered insulin, Frederick Banting and Charles Best, did not want to profit from their discovery at all. The two regarded profiting from a life-saving discovery as distasteful, and they had to be persuaded to even file an application for a patent.8 They subsequently relinquished ownership of the patent to their university in exchange for $1 each.8 They described their hopes when they wrote, “When the details of the method of preparation are published anyone would be free to prepare the extract, but no one could secure a profitable monopoly.” 11

Decades later, the duo’s dream of cheap, universal access to insulin may finally be on the horizon. With several insulin patents expiring, and fewer next-generation insulin products in the pipeline, follow-on manufacturers are beginning to show more interest in the insulin market.12

The first biosimilar version of popular brand-name insulin Lantus® (insulin glargine) hit the market late in 2016. While the biosimilar, known as Basaglar®, is available at a lower cost, experts do not expect it to offer the level of cost savings associated with a traditional generic.13

Substantial though they are, rising drug costs are not the greatest cost driver related to diabetes care. Although prescription drugs are the first and most widely-used avenue for medical intervention, it is estimated that inpatient medical costs for diabetics are more than double the cost of all medications dispensed.14

In light of what we have seen regarding diabetes and co-morbidities, it is not surprising that diabetics can have lengthy and expensive hospitals stays.15 In the case of type 2 diabetes, it is estimated that the sickest 20% of diabetics account for more than 80% of all diabetes-related spending.16 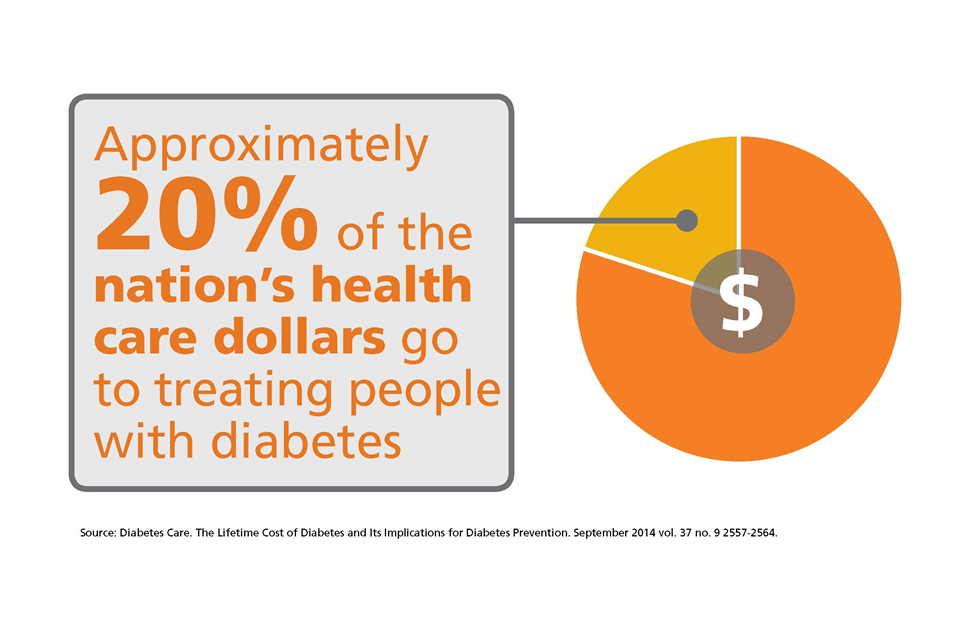 One of the biggest causes of diabetes-related hospitalization is a lack of adherence to antidiabetic drugs. People who fail to take their insulin are subject to a vast array of associated conditions and can sometimes end up in emergency rooms.17

Studies of insulin users estimate adherence at 62% for long-term use and may be even less for lower-income patients, where the out-of-pocket cost of medications can be a reason for a lack of adherence.18

It's also worth bearing in mind that the need to track constantly fluctuating blood sugar levels substantially increases diabetes-related spending.14 For diabetics using insulin or other injectable medications, there are a lot of supplies that are needed to properly administer the drug. These include test strips used to monitor blood sugar levels, lancets that are used to draw the blood, alcohol swabs to clean the injection site and needles and syringes to inject the medication. Spending on these items is estimated to be the third-largest component of medical expenditures in diabetes, behind only hospital inpatient care and the cost of prescription medications.14

What’s more, these direct costs of treating diabetes are not the only burden that the disease imposes on payers. Indirect costs include increased absenteeism, reduced productivity while at work for the employed diabetic population, and lost productive capacity due to disease-related disability or early mortality. Taken together, diabetes costs employers $69 billion annually in lost productivity.14

Given the severity and interrelation of diabetes cost drivers, it is now clear that only a broad-based approach to treating diabetes which melds medical, behavioral and pharmacological treatments options is likely to address the problem.