Using the patient’s voice to measure quality of care

Improving quality of care is one of the primary goals in U.S. health care reform. Examples of steps taken to reach this goal include using health insurance exchanges to tie provider reimbursements to quality care, and requiring insurers to report the percentage of premiums spent to improve health care quality.

The primary challenge going forward will be how to measure and quantify the success of these efforts, and ultimately, calibrate these results with other quality improvement efforts.

Optum® offers a standardized and scientifically valid way to measure health outcomes for individuals and large populations. Our health surveys and cutting-edge technology are perfectly positioned to address the need for quality measurement from the patient’s point of view.

Our SF-36v2® Health Survey and SF-12v2® Health Survey are two of the most widely used and widely cited (in the scientific literature) measures of functional health status. The tools are already well-established in the life sciences industry as a way to measure new drug efficacy and to substantiate marketing claims.

As you will read below, they are an emerging way for insurers, health care providers and governments to incorporate the voice of the patient into the decision-making process both clinically and administratively.

These surveys measure health status across eight domains and are summarized into physical and mental health scores. They have been translated into more than 170 languages and have been used around the world to measure health outcomes.

Pediatric surveys are designed to address the unique challenges associated with measuring health status in children.

The scientists behind our surveys

Our consulting team includes some of the top health outcomes scientists in the world, with experts in cognitive and clinical psychology, sociology, public health, psychiatric epidemiology and clinical medicine.

They have outcomes experience in over 60 therapeutic areas, and are equipped with proprietary databases to help translate patient-reported data into actionable information. They can provide clients with:

The SF™ Health Surveys were born out of three seminal population health studies dating back to 1974. 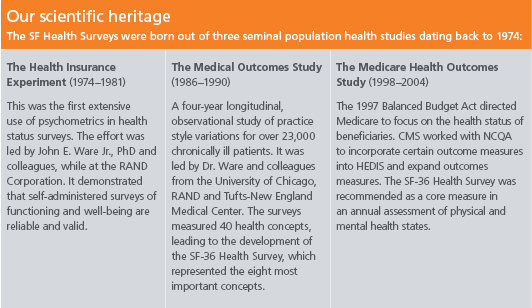 This is a scientific legacy that continues to the present. As of May 2014, over 20,000 peer-reviewed articles have been published utilizing the SF health surveys. The bibliography spans 63 different therapeutic areas.

Also, the number of randomly controlled clinical trials using the SF tools now stands at more than 2,500. This level of utilization and ubiquity contributes greatly to the data assets that make these tools so valuable and relevant today.

Our Smart Measurement® System uses the latest technologies to capture, benchmark and interpret survey data. This IT platform is ideal for organizations that want to measure functional health and well-being quickly and confidentially, while obtaining results in real time.

More than 400 payers, providers, and population health organizations are already utilizing the system.

Below are some examples of the ways health care organizations are using these tools in the real world.

Alberta Health Services (AHS) is the provincial health authority in Alberta, Canada. It is responsible for delivering health services to 3.5 million people.

Our SF-12v2 Health Survey was determined to be the best tool for the project because it is a standardized and scientifically valid measure of functional health status.

As a general health measure, rather than disease-specific, the SF-12v2 allows for the comparison of scores among and across disease/condition states, making the results more interpretable and actionable for AHS for monitoring and improving overall population health.

Patients participating in both programs completed the baseline survey during an appointment with their health care provider or at the start of an education class.

Follow-up surveys were re-administered at six and 12 months.

In all, 222 patients participating in the diabetes program took both the baseline and follow-up surveys. When the baseline scores for these patients were compared to the general population norm for patients with diabetes, we found the program participants had higher scores for both physical (+4) and mental (+3) health components.

This means the program participants had less disease burden/impact than expected. Surprisingly, we found that these patients were functioning at normal levels and at a much higher level than patients in the general population with diabetes.

These results were anticipated since the patients enrolled in the program were only recently diagnosed. The program was always intended to be preventive, proactively keeping enrollees from developing significant health status deficits.

In fact, the score of 35 on the physical scale was consistent with individuals suffering from severe congestive heart failure, while the mental score of 42 met the cut point for first-stage screening for depression.

This project also allowed us to develop general population norms specifically for the Edmonton, Alberta area. A total of 2,059 residents completed the SF-12v2 Health Survey along with a checklist of 24 self-reported conditions.

This allowed for a relative burden analysis for the general Edmonton population. The top self-reported conditions included low back pain (31%), arthritis (27%), high-blood pressure (24%) and high cholesterol (18%).

Seven years ago, Magellan Health Services, a specialty health care manager focused on some of today’s most complex and costly health care services, sought to better understand the impact behavioral health services have on their patients.

Magellan’s goals were to ensure the highest level of care, improve communication between individuals and health care providers, and measure treatment effectiveness.

Magellan and QualityMetric, Incorporated (now part of Optum) worked together to create the SF-BH™ Assessment.

The SF-BH is a self-reported assessment that measures “not only overall physical and mental health, but specific behavioral health concepts as well,” according to Joann Albright, PhD, Senior Vice President of Quality, Outcomes, and Research at Magellan. Dr. Albright led the effort to develop the SF-BH at Magellan.

Patients complete the assessment online at baseline and at follow-up appointments. The technology used to administer, collect, score and report on the SF-BH is the Optum Smart Measurement® System. The data is collected and scored automatically through this technology, and a variety of customized reports are then generated for Magellan.

These reports are also sent via email directly to the individual completing the assessment and the health care provider. The SF-BH was developed in both U.S. English and U.S. Spanish to address the needs of Magellan’s population.

Over the years, the surveys have been administered nearly 300,000 times. The results have been used by Magellan to:

Measuring these concepts has made it possible for Magellan to obtain a comprehensive understanding of the health of their population — critical information not measurable previously. The data is also ideal for use in comparative effectiveness research or analysis.

Magellan can now provide vital information about its programs, such as how the mental health burden of its population compares to that of the U.S. general population, whether interventions are resulting in positive or negative outcomes, and even how one approach compares to another. 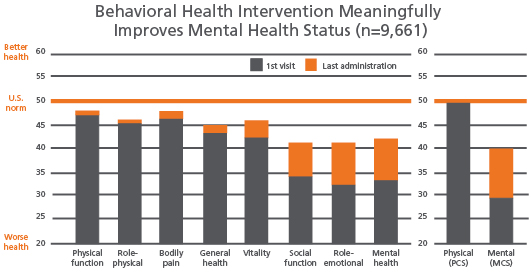 Possible applications for these tools and technologies

As we all work to bring the U.S. health care reform laws to life and to infuse quality of care into the process, pressing questions will become:

Answering these questions is easier said than done of course, but it seems reasonable to expect that the voice of the patient should be part of the equation. There are, quite naturally, many quality metrics involved. Many are already captured and being applied.

The Hospital Compare program at the Department of Health and Human Services is just one of thousands of examples. It uses quality measures such as patient satisfaction scores, hospital readmission rates, use of diagnostic tools (MRI, CT scans, mammograms), etc.

Health status scores fit in well with these kinds of measures and others. They help provide a better overall, more holistic, view of how the health care system is impacting patients. It’s important to know how patients are feeling and how their condition impacts their life.

They can help us determine which treatments make them feel better and which ones don’t. Unfortunately, this data is not currently well utilized or applied within the larger health care system. Optum can help change this fact. 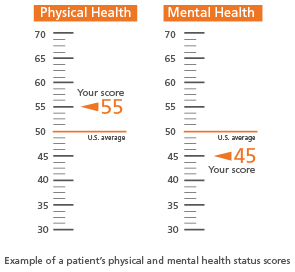